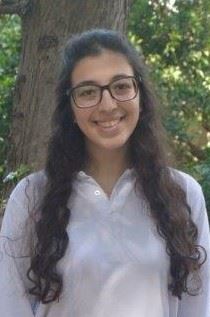 This is the story of a shy student who found her voice and went on to become an excellent public speaker.

Riwa Snih joined ISC-Choueifat in 2012 as a 7th grader after moving back to Lebanon from Saudi Arabia with her parents. When Riwa first joined ISC-Choueifat, she was a very quiet, shy, and introverted student. Now in 11th grade, Riwa has become a confident, well-spoken individual, a result of her active participation in the SABIS Student Life Organization® (SLO®).

In her first year at ISC-Choueifat, Riwa was continuously encouraged by the staff and teachers to get involved in SLO®. Her teachers knew that she was very capable and would quickly fit into the various clubs. Encouraged by her teachers and willing to push herself beyond her comfort zone, Riwa took their advice and joined the public speaking club, a decision that would change her life.

Riwa soon found that she enjoyed speaking in front of others. One thing led to another and before long, she also joined the United Nations club. Next, she became active as a prefect in the Academic Department, tutoring students in math, chemistry, and physics. Her participation in these clubs really helped build Riwa’s confidence and public speaking skills. This year, as an 11th grader, Riwa opted to join the Model Arab League (MAL) program, a multi-regional model competition in which high school and university students from around the world compete as representatives from member states of the Arab League.

From among 1,200 participants in 90 schools across Lebanon, Riwa was selected to represent Lebanon and compete at the National MAL Conference at Georgetown University in Washington D.C. in April 2017. At the conference, Riwa continued to shine and came home with the Best Delegate Award, one of the conference’s highest honors.

And Riwa’s talents are not only limited to public speaking! She also excels academically. Her average this year ranges between 92% and 94%, and she is following the honors curriculum at ISC-Choueifat. She will also be taking two AP® exams (in math and chemistry) this year, one year earlier than usual.

After she graduates in 2018, Riwa is hoping to be admitted to Princeton University in the U.S. to study
chemical engineering. We wish her the best of luck!