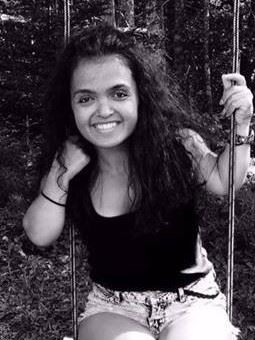 This is the story of a girl who stood tall against the challenges she faced in her life and came out on top.

Abir Ayoub joined AIS – Al-Sulaimaniah in 2005 as a 5th grader. She graduated from the school as a member of the Class of 2012. In her first couple of years at school, Abir felt challenged for being a person of short stature. She felt “different” and was intimidated by the other students. As a result, she fell into a depression in grades 7 and 8 and had great difficulty socializing with the students in school. That could have been the end of Abir’s story, but two things happened that changed everything.

First, Abir reached out for help. She opened up to her Academic Quality Controller (AQC) about the troubles she had been experiencing. Attuned now to Abir’s challenges, the AQC at the school focused her efforts on making a difference in Abir’s life. She worked with Abir to help improve her confidence and academic performance, which had been hindered by the social challenges she had been facing. As her confidence improved, so did her grades. Cs changed to Bs and then to As, and, when she graduated, Abir had an overall average of B+.

The second thing that changed for Abir was her involvement in the school. With growing confidence and better grades, Abir felt like a new person. In 2010, she joined the SABIS Student Life Organization® (SLO®) and participated in numerous departments. She eventually found her niche in the Outreach Department and attended the Student Life Training Conference in Bath, England. The camp proved to be a life-changing event for her. “I am very grateful and thankful for the opportunity [to attend the SLTC]. It made me stronger and more driven to be my own person and a leader,” said Abir.

In Grade 11, Abir became the head of the Academic Department, and in Grade 12 she was the SLO® Head Prefect. She became a very strong, optimistic, and confident individual who her peers looked up to. When thinking back at her time in SLO®, Abir says, “SLO® has positively shaped my school experience […].I learned the importance of trying and never giving up.”

After Abir graduated from AIS, she went on to pursue a degree in Health Promotion at Dalhousie University in Halifax, Canada, where she quickly realized that her time at AIS had given her a strong academic foundation and life skills. “AIS taught me to be hardworking and dedicated and helped me develop strong study skills from a young age. This made me productive, responsible, independent, and aware of my surroundings, which was a huge asset at university. Academically, I was always one step ahead!”

Abir has just graduated in the spring of 2017 with a degree in Health Promotion. We are very proud of her and wish her the best of luck in all her future endeavors.