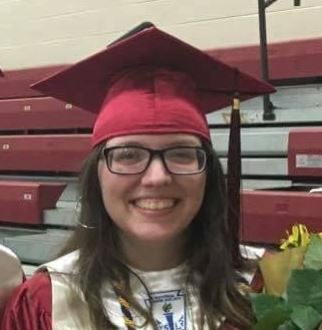 This is the story about an inspirational girl who has excelled despite a series of unfortunate events in her personal life.

Rachael Gotterson joined the International Academy of Flint in 2009 as a 5th grader after being homeschooled up until then. Initially, Rachael struggled socially, finding the transition to a formal education setting challenging. On top of having to adjust to challenges at school, Rachael’s parents went through a divorce, and her mother, with whom she was living, fell on hard times, so Rachael moved in with her older sister (a teacher at IAF), who was named as her guardian. Later, Rachael experienced a serious, protracted health issue that required her to be hospitalized and miss school. She also tragically lost a sibling to suicide.

Through all her struggles, Rachael remained strong. She was an active member of the SLO®, which she attributes with helping her carry on when her world seemed to be crashing down around her. In 2016 she was selected to travel to Athens, Greece, for the Student Life Training Conference. Throughout her time at IAF, she has participated in a variety of community service projects such as food drives at the school, McKinley park clean-up, and the “Big Sisters, Big Brothers” program. This year, her senior year, she serves as the Head Prefect at IAF, and she is the face of SLO® at the school. She tutors students and is part of the robotics team, which she also captains. Additionally, she has played a pivotal role in the school’s bullying prevention initiative, drawing on her own experiences as a younger student.

When thinking back on the impact SLO® has had on Rachael’s life, she says that it was a “huge help.” “I
was going through some really rough struggles in my life […]. Not only did SLO® make me a happier person, but it made me capable of taking all the struggles life had thrown at me and turning them into something positive. I was able to help others as well, and I learned that I wanted to inspire people in whatever I did in life.”

Rachael will be graduating from IAF this year, and in the fall she will be attending Kettering University, where she wants to pursue a major in computer programming. We wish her the best of luck in all her future endeavors!